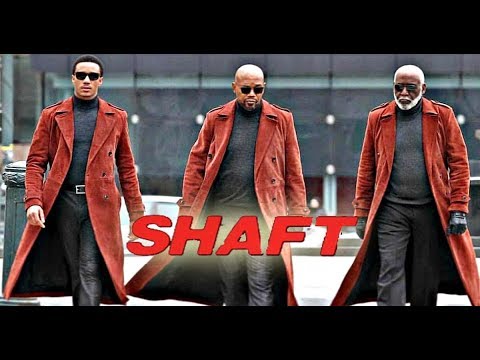 If you want to see de-aging FX of Samuel L. Jackson, skip the over-rated and cloying Captain Marvel and just go see Shaft currently in theatres. The opening scenes set up the premise in 1989.

Just finished catching a matinee of the new Shaft film, which is either the second if you don’t recognize any movie before the year 2000 or it is number Five if you count the original Shaft, Shaft’s Big Score, and Shaft In Africa.  Richard Roundtree plays the same character in all of them, as well as a TV series indicated on imdb which few have heard about.  This time around, one throw-away line of dialogue corrects a bad call from the 2000 film in which Roundtree’s John Shaft was the uncle of Samuel L. Jackson’s iteration. There is a reference to him being a better father once he stopped, “pretending to be my uncle.”  I think they were being too logical when they did the 2000 reboot, factoring in Jackson’s age.  Now they place Jackson at age Sixty and presumably Roundtree is still a sharp-witted man of his Eighties.  The repository of all knowledge, rottentomatoes, has 89 critics giving it a green rotten splotch of 34% and yet it has a vetted, verified audience rating (3, 146 people who provided proof they have seen the movie) at 94%.  So who do you trust more?  89 critics who saw it for free and are focused on identity politics and whether Shaft adheres to the behaviour code and attitude of…. Twitter, Salon, and The MarySue or anyone who believes if you are not draped in a rainbow flag you are a Nazi? Or do you believe the three thousand, one hundred and forty-six people who rated and maybe commented for free? By now you know what kind of thing is your cup of tea, in any case.

Boxofficemojo today has it only ranking in #7 of the weekend’s movies with $9, 703, 744 domestic. So it has recouped at least what Netflix paid for it already.  Netflix will start showing it June 28, so it will have a short window to make whatever it can theatrically.  It was worth seeing with an audience, but partly for the reassurance that others are laughing at the same frank talk that some critics refer to as “dinosaur.”  The movie itself can feel like an episode and a procedural in that you get what you expect from a sequel. But the refreshing part is its willingness to embrace the point of view of the street wise elder Shafts and have fun with that somewhat at the expense of the more modern-thinking son.  The millennial does have his moments of dignity and the chance to kick ass, without the elders are not the butt of the joke.  They can humorously point out the absurdities and contradictions of modern sensibility.

Below, if you have the time, is an example of a sometimes entertaining pundit of fandom on the internet relishing the audience reception of this new Shaft and the fact that it is not politically correct which demonstrates perhaps that there is a demand for Hollywood to ditch its fake progressiveness and be more down to earth.

Filmmaker, from North Bay, Ontario, currently in Toronto. Graduated from Humber Film and TV Production in the Nineties. Made countless short films. View all posts by jawsphobia